Srinagar, May 22, KNT: Academicians of the Kashmir University on Sunday thanked the Jammu and Kashmir LG Manoj Sinha for finalizing the appointment of the new Vice Chancellor.

The LG, who is the Chancellor of KU, appointed Prof. Neelofer Khan as first female VC of Kashmir University on Thursday. Her appointment will be for three years.

“We thank the Honourable Chancellor for finalizing the appointment of the VC of KU. We are grateful to him for selecting the VC from Kashmir University as the same is an endorsement of the dedication and hardwork of faculty members from KU who are now holding many VC positions in Jammu and Kashmir,” said senior KU teachers.

They said they expect the new VC to resolve the grievances of faculty members on priority and initiate interview process to vacant teaching positions.

Prof Neelofer joined as KU VC on Friday and got the much-delayed admission notification for PG courses issued on the same day.

Well placed sources in KU Administration said the VC is scheduled to chair her first meeting of all Deans and Heads of Departments on Tuesday morning to take feedback from them about the status of ongoing academic and research programmes.

“The VC is expected to issue important directions to the HoDs and Directors of Off-Site Campuses in Anantnag and Baramulla about the future course of action,” sources said.

It is likely that Prof Neelofer may effect some top-level changes in the administration in the backdrop of serious charges of misconduct and mismanagement against some officers.

An administrative reshuffle of Joint Registrars, Deputy Registrars and Assistant Registrars is being considered to provide good governance under the leadership of the new VC, the sources said.

It may be noted that KU teachers have been pressing hard for early appointment of the new VC as the three year term of VC Talat Ahmad had ended nine months ago. They had made several appeals to the LG to appoint the new VC expeditiously so that students and faculty members do not suffer any more due to the administrative stagnation in the University.

“There was total administrative collapse in the KU. Faculty interviews are pending. Promotion of non-teaching staff was halted. Admissions have got delayed. We are confident that Prof Neelofer will address all issues of the faculty,” the teachers said.

It is noteworthy that the University Administration has been running on temporary arrangement since early this year. While the term of former VC Talat Ahmad had already ended in August 2021, the three year term of Registrar Dr Nisar Ahmad also ended in January 2022.

KNT is in possession of a document whereby the LG Office (Raj Bhavan) in February allowed time-bound continuation of Dr Nisar Ahmad as In-Charge Registrar till the time the new VC takes over in the University.

“I am desired to convey the approval of the Hon’ble Chancellor (Hon’ble Liutenant Governor) for continuance of Dr Nisar Ahmad Mir, as Registrar, University of Kashmir till the time the new incumbent Vice Chancellor takes over in the University,” Ajay Bharti, Deputy Secretary, Raj Bhawan wrote to the former VC Prof Talat Ahmad on February 11. 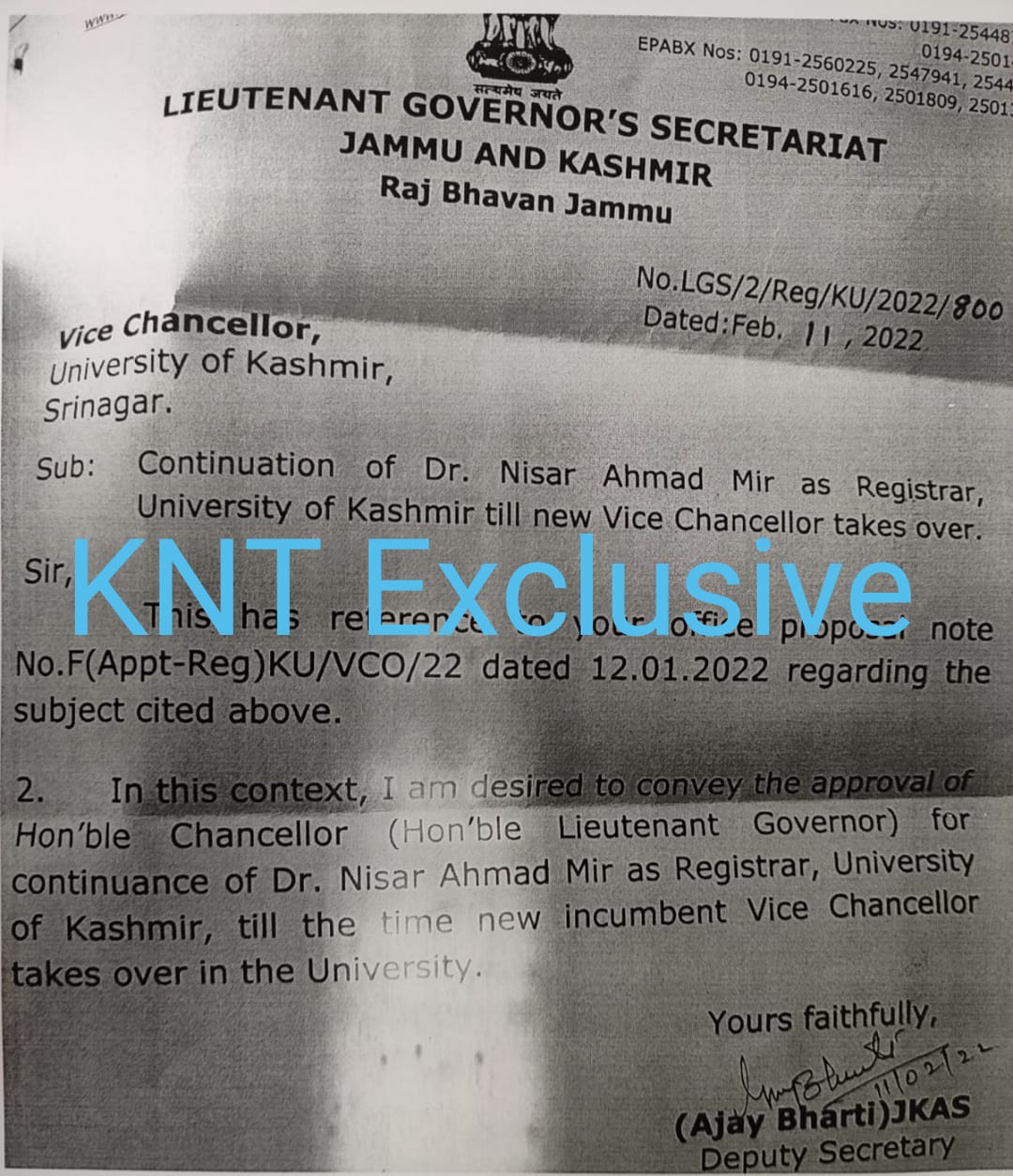 Meanwhile, KU students have urged the new VC to hold a meeting with class representatives at the earliest so that they are able to convey their concerns to her.

“We want to interact with the new VC and share our thoughts with her about what’s going on in the University Departments and what facilities we need in classes and labs,” said several students who approached KNT.