A local court here did not consider the bail plea of a close aide of dread deceased gunman Papa Kishtwari saying that the offences allegedly committed by the accused are serious and heinous and the offence is against the state and society.

Ghulam Rasool Ganaie son of Muhammad Subhan, a resident of Garoora Bandipora had been arrested by police station Nishat in connection with an FIR 16/2002 under section 302, 364, 201, 120B, RPC in connection with the murder of a Nishat Contractor Ali Muhammad Mir.

The accused had applied for the bail through his Counsel Peer Aijaz and Associates.

The Court as per news agency Kashmir News Trust after discussion and arguments from Syed Sareer Ahmed representing Union Territory of Jammu and Kashmir said that bail is a right but under certain factors this can be denied in the interest of the state and society.

It said that the main accused Papa Kishtwari is already dead and the accused seeking bail is the only accused now. The proof which is likely to come on the record can not be allowed to be thwarted by the accused at this stage.

“The basic rule broadly put is bail, not jail. But there are factors that justify the refusal of the bail. The accused is accused of commission of an offence which is non-bailable and is punishable for death or life imprisonment,” the court observed and rejected the bail. (KNT) 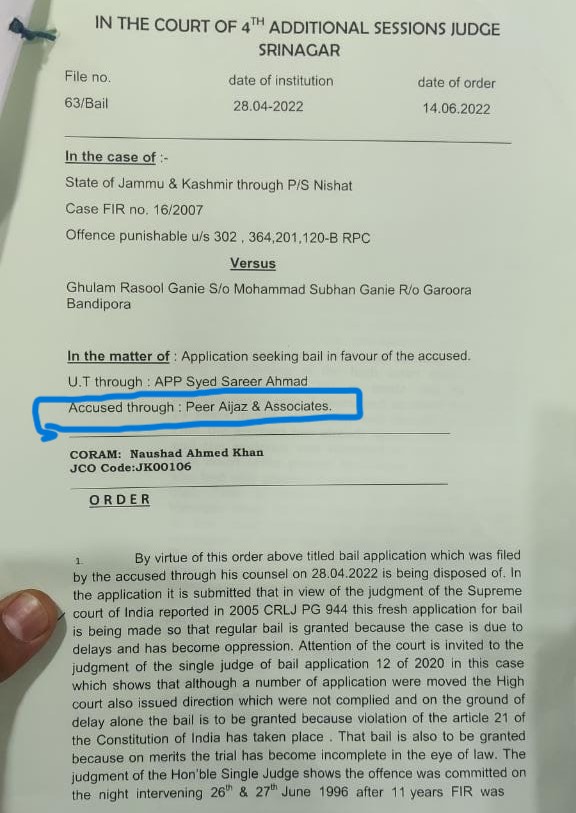