Srinagar, May 24, KNT: Railway Police have busted a non-local gang of criminals involved in the copper wire theft here in Kashmir capital Srinagar.

A Railway Police official told news agency Kashmir News Trust that police have arrested seven non-local thieves including a lady who were involved in the theft of OHE copper wire on the railway track at kilometer 56.7 committed during the intervening night of 30 and 31 March this year.

All these criminals have been arrested from Shergari Haft Chinar and Parimpora area of Srinagar city.

Police said that the stolen property recovered from the gang include OHE Copper Wire worth Rs 180,000, one Auto-Rickshaw (JK16-1304) and weapons of offence including hexa blade, cutter, rope and earthing wire.

While talking about the modus operandi of the gang, police said that the group has been found committing the OHE wire thefts in the jurisdiction of GRPS Srinagar on the track sites by resorting to consumption of drugs provided by the accused lady and using the auto-rickshaw under question and the weapons of offense for the commission of crime.

“The accused lady herself is dealing with the scrap and is using the stolen property for means of obtaining illegally huge amount out of crime. The accused are being interrogated about their involvement in other such similar cases registered in the GRPS Awantipora.” (KNT)

53-year old man jumps into the river in Srinagar 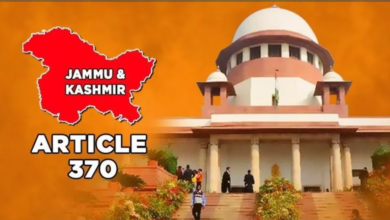 Article 370: They can’t have a leg to stand on in Supreme Court: Omar Abdullah – ‘Kashmir News Trust #KNT