Locals in Kargil are up in arms against a Tibetian origin Buddhist monk from Leh who has started a ‘Pad Yatra’ to lay a foundation of a monastery in Kargil. Within the radius of 20 kilometers of the land in question, not a single Buddhist resides and yet as per ‘Kargil Democratic Alliance’ the politically motivated yatra led by a person who is an outsider and has nothing at stake is not being stopped by authorities.

The Co-Chairmen of Kargil Democratic Alliance-an association of social and religious organizations, Qamar Ali Akhoon and Asghar Ali Karbalai have written to the Deputy Commissioner stating their apprehension that the march is politically motivated and could disturb communal harmony in Ladakh.

The letter which is in possession of news agency Kashmir News Trust states that the KDA held a meeting with representatives of the Ladakh Buddhist Association (LBA) regarding the Gompa construction and both parties agreed the issue must be resolved amicably. It went on to add that under such circumstances, a third person having no stake in the matter was trying to disrupt peace in the region.

“What makes the things worse is the fake propaganda run by some vested interest mainland media. There is clear order from the then government in 1969 that land allotted to Buddhists could only be used for the construction of residential or commercial buildings. The order prohibits religious construction on the land,” a leader from Kargil told news agency Kashmir News Trust. 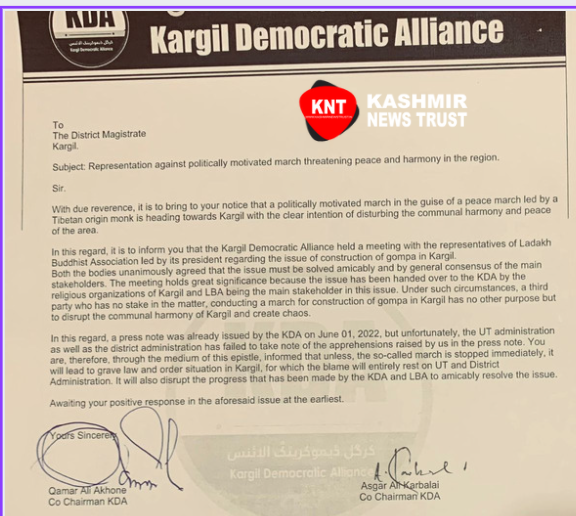 He said the ‘Pad-Yatra’ from an outsider is nothing but to create communal divisions in Ladakh.

“Buddhists do not live within 20 km of the land and that the current building there is a Buddhist guest house and should remain so,” he concluded.

Earlier, a section of online media had claimed that Buddhists in Ladakh have been staging massive protests as Muslims are not allowing them to renovate a monastery in Kargil.

Ladakh Buddhist Association leader, Skarma Dadul has said that they do not want to create any tension in the region. (KNT)

Academic activities in all Falah-e-Aam Trust schools in J&K ceased, students asked to enroll themselves in Govt Schools